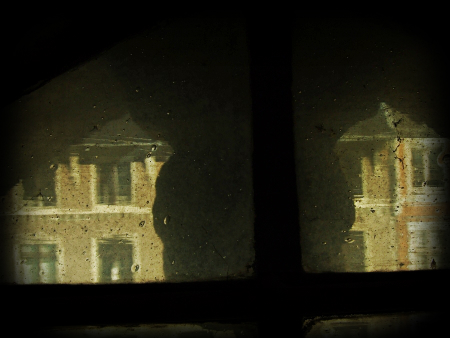 What happens at city
when blank is a building
and the corner is brutish
and the road ahead pale
like something at the end of time
see nihilism is a tentative position
an aggressive form of modesty
because below the blue sky
a head is incapable of understanding
the many things that are absurdly naked
in the world;
of all words
we select a crown
to place that holy concept
over our heads like laurel
to impress the wavering leaves of trees
see nihilism is nothing about thought
but about feeling what thought cannot attain
at the light you stop and feel the beast
the wise thunder of blood
and what happens when city
is trembling and being chased
by whiteness or a hot drunkenness
you pick a word
and make claim that it will save you
under the streetlamp
like a natural haze
at that common street
you remember like an ascetic
that this flesh will be forgotten

The realization that nothing matters, that all is in vain, is inconsequential insofar as it changes nothing. We remain living the same lives as before, if not for the exception of a newly-acquired taste for sadism that enjoys seeing everything annihilate itself.

I’ve noticed that humanity has an innate insensitivity to oblivion. It builds and labors as if there will always be human beings around to witness their own struggles and achievements. Their seriousness is a form of naïveté. No one epitomizes this naïveté better than the writer.

We can never be sure an animal acts in seriousness. It can be ferocious, alert, aggressive, intent, perseverant and devotional, but its ability to shift from intense concentration to laziness suggests that it does not really care for the outcome of its actions.

It feels me with horror and rage to hear people claim that life is profound and inexhaustible while they spend half their lives in front of a computer pretending to live life to its full potential.

An animal without thinking of hands opens a cave of innocence. It sleeps without the weight of tomorrow, like a burning match. The other animals are heavy with knowledge, spinning like kaleidoscopes of fat. My ideal self is a plant, surrounded on every side by invisible expanses of solitude. Sometimes it could think, but always to negate. It will say: these petals have not changed the world. And it will sway and tremble in a monotonous wind. If the world is a vessel sinking irrevocably into forgetfulness, there is no real distinction of types. These beings we see, or imagine and sometimes become have no name. Like thistles with nameless thorns. Like music with blind hours. Like blood without the river of taste. I see the fur and claws submerging; the animal does not struggle. It drowns like a bean in water. But I still don’t know if in a glass, an ocean or in eternity.

The night is dark
the soul is charred
its landscape tarred
trees bone black
black serpents paved till horizon –
the sad spectacle of thoughts
receding unhurriedly
as stars into nothing
white lions into oblivion;
I observe scattered teeth
engulfed in black blood –
that is the night sky.
Everything turns mysterious,
my hand the lonely shade
the ultimate despair;
everything
merging irrevocably
with the dead of night.

careless evenings
youth, dream, iron
with a fossilized joy in my face
I put on the chains
to await bitter destiny

and a silent
gaze
is vestige
of vacuous past

in that haste
of a gamble
I fooled around with desire
noise and love,
reckless towards
the assemblage
of oblivion

Bare
on the floor
bare
with our heads
facing
the final precipice
of tomorrow
words coming
like agonies
born from the regret
of the entire universe
our eyes
etceteras of tears
unable to listen
the ticks of the clock
in the morning
light,
inebriated with
the perspective of escape
bare and obliterated
on the top floor
of a building
alongside
oblivion.

Inaccessible trees
stand in the fog
as the limits to my world,
a fog dense and metaphysical
trees alien as my cavernous thoughts
a few brave lifeless sticks emerge from the snow
the milky wind brushing
whitening them slowly
with the impassible oblivion
that has set in,
an ivory spell
led astray into this cold nook
of washed away eternity,
while I’m encapsulated
in the immobility
of this white extraneous soul
a pleasing despair
that is felt
after each
footstep in the ice.

I am constantly disappearing…

on these modern walls

should we celebrate our meaninglessness

or despair from our short-lived sojourn
Are these darkest skies, games to play

the cries of hunger and misery – unreal songs

and float about unending abysses

so close to the edge of madness – mothers reply

hold my hand, while we both come undone

consumed by the selfless void, our friend eternally: