The Character – A short monologic play 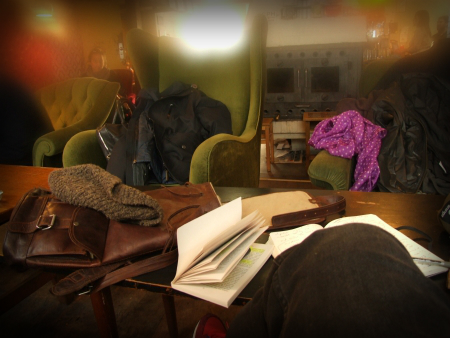 [The Character gets up, apologizes to his colleague for taking up two hours of her time. Begins to put on his coat and scarf on.]

Pablo: [addressing his wife] What a character, that guy.

The Character: What did you just say?

Pablo: [impassive] That you’re quite a character.

The Character: What the hell is the problem with you?

Pablo: What? Me? What are you talking about? What do you know about my world, my conception of the world, my inner drama, my subjective constructs? Do you have any idea what I mean by the word ‘character’ and could you have suspected that I see the world as a stage where we are all characters that pretend to be this or that, and some of us are better at it, and some are portraying so bizarrely absurd roles, that they deserve being pointed out and addressed as “one-of-a-kind characters”? I am conscious that saying out loud, “what a character” may connote a derogatory sense to the word. I am aware that we pretend to be immersed in a kind of social nebula, where things appear the same to all members of the community. But I’m sorry to say, that is not the case, we don’t all share the same monotonous perceptual paradigm and I’ll keep calling you and everybody else characters, yes characters in…

[The Character and colleague exit café]

Pablo: … in the absurd drama of the earth.